Have you ever wondered what happens to a person who exchanges the truth of God for a lie? Perhaps you know someone who has made this troubling exchange. They were once walking in the truth of God’s Word, but now they have created a new reality—their truth, which conflicts with God’s truth, placing the “exchanger” in the unenviable position of going to war with God. Paul talked about such a person in Romans 1:21-25. Let me share with you what happens to such a person.

For although they knew God, they did not honor him as God or give thanks to him, but they became futile in their thinking, and their foolish hearts were darkened. Claiming to be wise, they became fools. Therefore God gave them up in the lusts of their hearts to impurity, to the dishonoring of their bodies among themselves, because they exchanged the truth about God for a lie and worshiped and served the creature rather than the Creator, who is blessed forever! Amen (Romans 1:21-25).

Anytime we switch from adhering to God’s truth to clinging to an alternate fluid reality, we can expect a process of “soul degradation.” Paul was talking about a group of people who knew God, but for reasons that are not entirely clear, they decided to walk away from Him, choosing instead to worship and serve the creature more than the Creator. From that point of departure from God, things became progressively worse for them. Their lives became a slow march of deterioration of body and soul. We know why: God is pressing down His wrath on them.

Paul writes about the displeasure of God raining down from heaven on any person who chooses to push His truth out of their lives. This passage applies to all of us, not just the determined sinner who actively and angrily suppresses the truth of God out of their lives. Paul tells us about a universal, absolute cause and effect regardless of how big or nasty the sin is. He is saying the displeasurable wrath of God automatically descends from on high when a person chooses to sin, whether it’s your cute toddler or the hardened criminal. Paul uses the language of “suppressing the truth” of God out of their lives, which means pushing aside God’s truth—a voluntary choice to ignore what is right.

In verse 21, he talks about how nobody has an excuse for pushing the truth of God out of their lives. He further expands on this idea in Romans 2:14-15 when he talks about the non-believing Gentiles who do not have the Bible but know how to do the things contained in the Bible. Knowing the truth is not the exclusive domain of the religious person. It does not matter who you are or how much you know about God; none of us can get away with using excuses when responding incorrectly to God. We all are without defenses (Romans 1:20).

But he gives more grace. Therefore it says, “God opposes the proud, but gives grace to the humble” (James 4:6).

For whatever reason, some people choose to alter God’s truth into a truth that is more aligned with their preferences. When they do this, they set themselves up for a displeasurable response from God. I have seen this in my life. For example, the “so-called” most minor sin in my marriage puts me in an adversarial position with God (and my wife). He is no longer “for me” regarding my sanctification (1 John 1:7-10). Though I can never lose my salvation, I can impede our relational well-being when I choose to do my thing. This pushing of God’s truth out of my life also interrupts the shalom in our marriage.

You cannot sin and expect things to be okay between yourself and the person with whom you sinned. God’s Word is true: You push His truth out of your life, and you’ll incur His wrath. I often use a weenie balloon illustration when describing Romans 1:18. It goes like this: The idea of suppressing the truth or pushing it out of your life is analogous to squeezing a weenie balloon full of air. The balloon becomes exaggerated on each end as soon as you press it in the middle. You cannot put pressure on the center without the ends being affected.

The balloon becomes out-of-balance, and so does your life when you push the truth of God’s Word out of your life. You become awkward with God and awkward with others. You’re no longer in step with what is right (Galatians 2:14). When God’s displeasure comes into our lives because we chose to reject His truth, we cannot help but live an awkward, out-of-balance life. We cannot be Jesus-normal when God is standing in opposition to us. 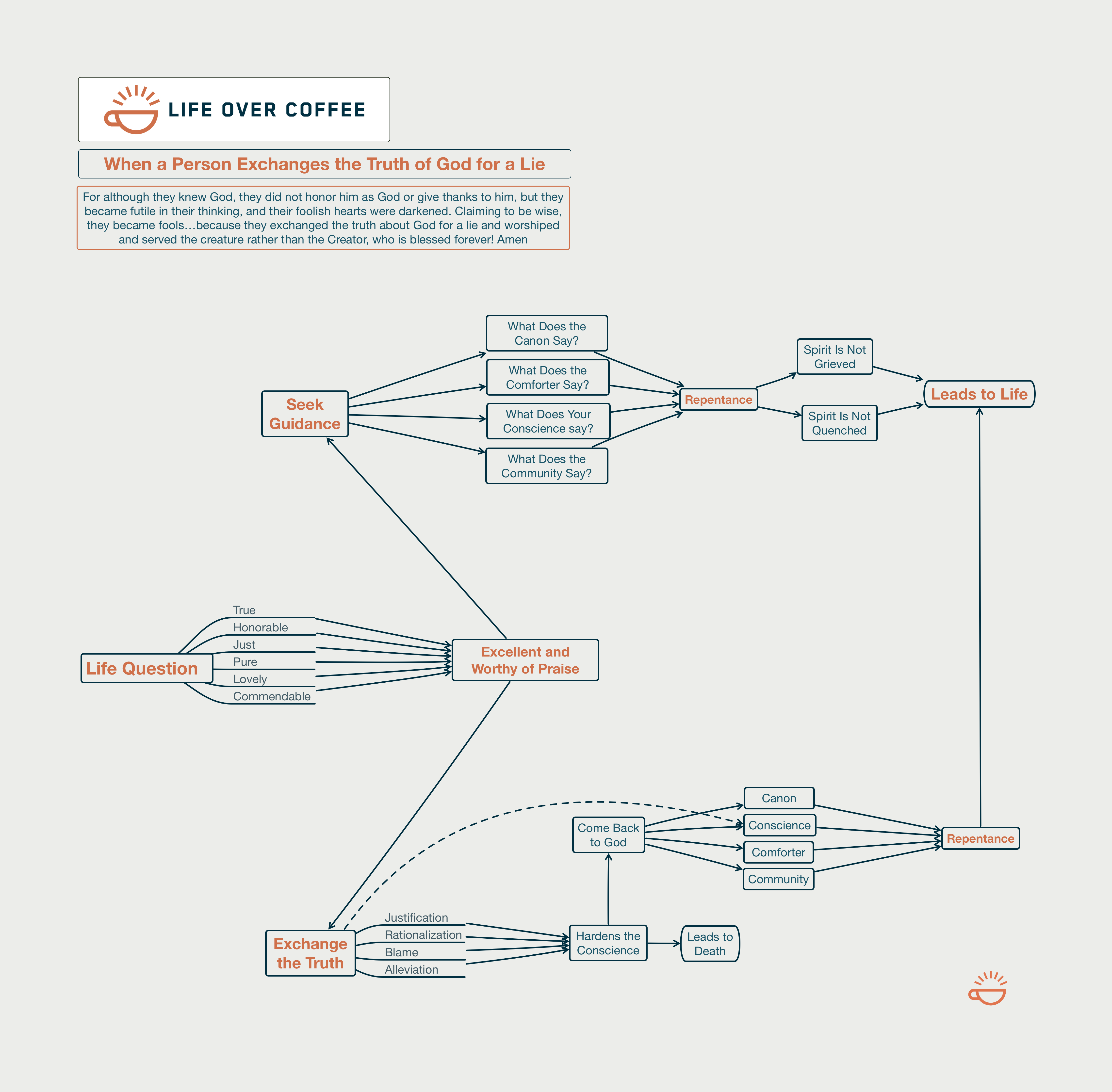 You can visually see what I am talking about in the Mindmap. The process goes from left to right. The individual is thinking about a life question, e.g., how I want to live in God’s world. The first step in that process is to run their thoughts through the Philippians 4:8 filter. You can do this by asking yourself a series of questions:

If the person is unsure how to answer these questions biblically, it would be wise to reach out for help. They can access the four means of grace we are given from the Bible to make sound decisions:

After seeking sound advice from these four means of grace, the person should be able to proceed in faith, knowing the Lord’s favor is on their lives because they were not trying to push their agenda. However, some folks want to do what they want, regardless of what God and others think about their choices. If that is their response, you want to consider at least these five possible reasons they reject God and sound advice.

Regardless of how they got to the point of their lousy lifestyle choice, they prefer to stick with their poor choice rather than do the hard thing, which is to die to themselves and walk with the Lord (Mark 8:34). The call to die is much harder at first glance than the desire to do your thing; so they do what they want to do. At this decisive point, the individual has begun exchanging the truth of God for a lie, though they have not exchanged it entirely. But they are well on their way to the dark side. Let’s review what has happened thus far in chronological order:

For when Gentiles, who do not have the law, by nature do what the law requires, they are a law to themselves, even though they do not have the law. They show that the work of the law is written on their hearts, while their conscience also bears witness, and their conflicting thoughts accuse or even excuse them (Romans 2:14-15).

Paul talked about how our souls churn inside us when our consciences struggle with God’s morality. Any decision to do the wrong thing does not mitigate the “noise” that is going on in our souls. Just because we decided to do what is wrong does not mean our struggle between right and wrong has subsided. Even the unregenerate conscience fights the battle with soul noise. Though the person has suppressed God’s truth from his life, his conscience is still active and responding to his wrong choice. The only way for him to get rid of his sin is by repentance, but if that is not an option, he must begin a process of re-scripting his conscience so he can fully exchange the truth of God for a lie and live with himself at the same time.

With the Canon sitting on the self, the Comforter turned down low to where the Spirit no longer illuminates his mind, and his dismissing of community, the last thing for him to do is shut the conscience down so he does not have to hear its voice pinging him at every turn. There are four ways for him to alter his conscience to push God’s truth entirely out of his life successfully. When finished, he will be able to do whatever it is he wants to do without feeling. Those four things are:

Since repentance is out of the question, he has no choice but to turn to these four noise reducers to live in his version of the truth. Once that is complete, he successfully exchanged God’s truth for a lie. That is no man’s land. It is flying blind in a storm. It is the worst possible place for any human to be. God is not with him, for him, or helping him. His mind is evolving into darkness. He is becoming desensitized to the truth. He has set aside the people who can help him the most. He is on his own.