Ep. 194 The Cyclic Effect of Cynicism, and the Cure 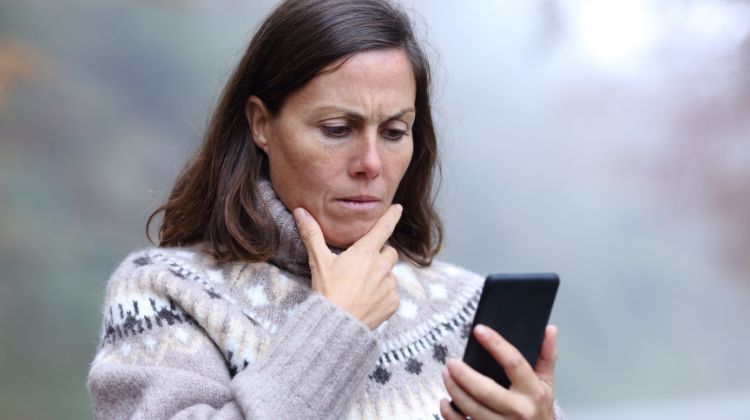 Shows Main Idea – When disappointments accumulate in a person’s life, there is a strong temptation to give up. But more than giving up, the disappointed soul becomes bitter, suspicious, and even hostile toward the hope of a better kind of life. The Christian cynic does not have God-centered faith but wallows under the negative waves that roll over them.

Perhaps they began their journey with Christ optimistically. But for many reasons, where they are is a million miles from where they hoped they would be at this juncture in their lives. There could be many reasons for this outcome:

Perhaps you can add to this list, but the result is the same: you’ve not only given up, but you live in a “self-fulfilling prophetic world” where you know that no matter what you do, the other shoe will drop. The good won’t last. The silver lining is a set-up for severe weather. And the worst of all, God is not on your side.

Rather than believing in the active goodness of God, you live inside your suspicious mind where your “endless loop tape” tells you that all roads lead to a dead and disappointing end. The soul that is disappointed one too many times lives in a cyclic world—what I call the “cyclic effect of cynicism.”

A cynic is a suspicious person. They will more than likely tell you why something won’t work rather than the optimistic hope you find in the active goodness of God on someone’s behalf. They would read Hebrews 11 from the most cynical perspective rather than how the writer talked about the great faith and hope of those who lived in horrible situations.

The Christian cynic will not enter into the fray with you but tell you all the reasons why what you want to do won’t work. They may even describe themselves as that “helpful friend” that provides the “other perspective” as a measure of protection and warning, so you don’t do something dumb.

The difference between the cynic and the faith-filled person is that the cynic does not talk about hope, trust, faith, endurance, optimism, possibility, and how God is greater in you than whatever is in the world. The cynic will “spiritualize” their counsel, and never discern how they have morphed into the sin of cynicism.

The Cyclic Effect of Cynicism

The question is, “how did they come to this place of cynical bondage?” Two vital things have to happen to become a Christian cynic. One of those things is a disappointment: something disappointing enters into the Christian’s life.

You could think of your disappointments like the shaking of a snowglobe. All frustrations shake you up on the inside and then you “resettle to your preexisting condition.” If you are a contented Christian, the “shaking of your soul” will mature and strengthen you. 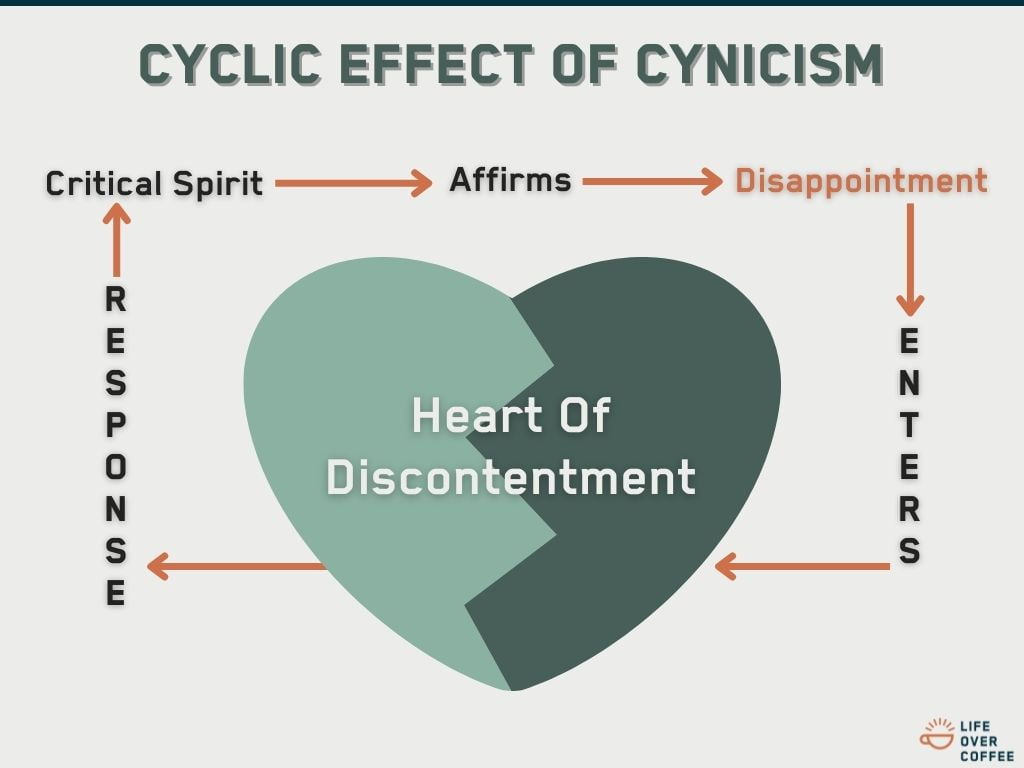 We rejoice in our sufferings, knowing that suffering produces endurance, and endurance produces character, and character produces hope, and hope does not put us to shame, because God’s love has been poured into our hearts through the Holy Spirit who has been given to us. – Romans 5:3-5

If you are a discontented Christian, the “shaking” will exacerbate your preexisting condition of discontentedness. The conclusion is straightforward: the trouble in your life will mature you or send you into more profound cynicism, and these outcomes are dependent on the kind of person you were before the difficult times came.

The Cure for Cynicism

Brothers, if anyone is caught in any transgression, you who are spiritual should restore him in a spirit of gentleness. Keep watch on yourself, lest you too be tempted. Bear one another’s burdens, and so fulfill the law of Christ. – Galatians 6:1-2

It is monumentally hard to get out of the ditch of cynicism. One reason for this is because the cynic is afraid to admit that they are this way. Admission means doing something about it, and if they attempt to do something about their condition, they know they might be hurt again, which is their kryptonite.

Cynicism is a fortress that the “hurt too often” person hides within so they can keep from being disappointed again. It’s a voluntary time out from Christian life. Owning this bondage is their first step of faith, and you want to be gentle when helping this kind of caught person.

Once they come to the place of admittance, you want to begin teaching them about who God is rather than the version of Him that they have accepted or edited Him to be. The Lord is generous, kind, gracious, merciful, persevering, and loving. He desires to give the abundant life to anyone who wants it, but the difficulty will be how this kind of life comes to us.

There is no question that the Lord employs the crucible of suffering as the means to mature us, as Hebrews 11 articulates. Coming to grips on the “dying to self theology of Christ” will be the biggest hurdle for the cynic to cross. And you want to present this truth to the struggling cynic in ways that will encourage them to step into the crucible, rather than giving them the facts about this matter.

Too many Christians would say something like, “God has called you to suffer. This path is the same for everyone.” My friends, we can do so much better than this. You must “exegete your cynic” by understanding how they got to where they are and the uniqueness of their life. You must not slap our Bible cliches across their backs, with an appeal to “buck up for Jesus.”

Christians do soul care, which means you want to care for this unique person who is in front of you. Here are some ideas for how you can care for them.