Speaking to the Practical Role of Fathers with Children 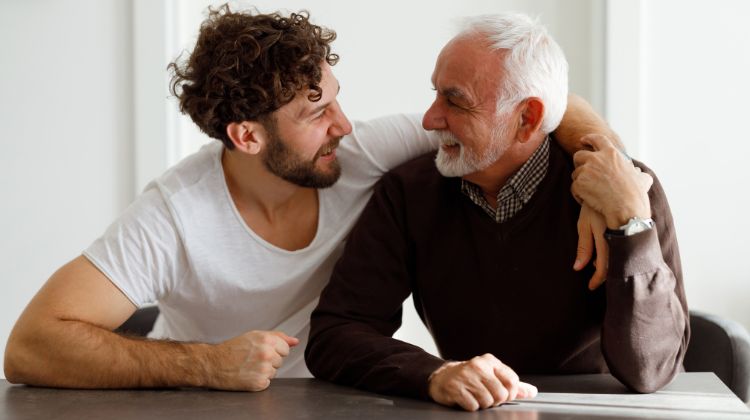 Having two genders is not just a neat way to think about the human family. There are functional and irreplaceable roles for each gender. When it comes to parenting, the dad and mom have unique purposes, practices, and effects on children. In this article, I’m addressing the critical need for fathers to step into the responsibility of rearing their boys and girls in the way that only they can. This job is for him, and the Lord has gifted fathers to do it well.

The two most essential timeframes in a child’s life are from birth to two years of age and from ten to twelve years old. These two windows are approximate. The first window of time is the child’s early developmental years. The second window is the child’s transition to becoming an adult.

During the first two years, the child receives vital training that teaches him how to depend on his parents, along with adapting to being obedient and other life lessons. During the second window, the young adult learns how to depend upon the Lord more as the teenager starts transitioning toward eventual independence from his family. This graphic show describes the three stages of a child’s life. 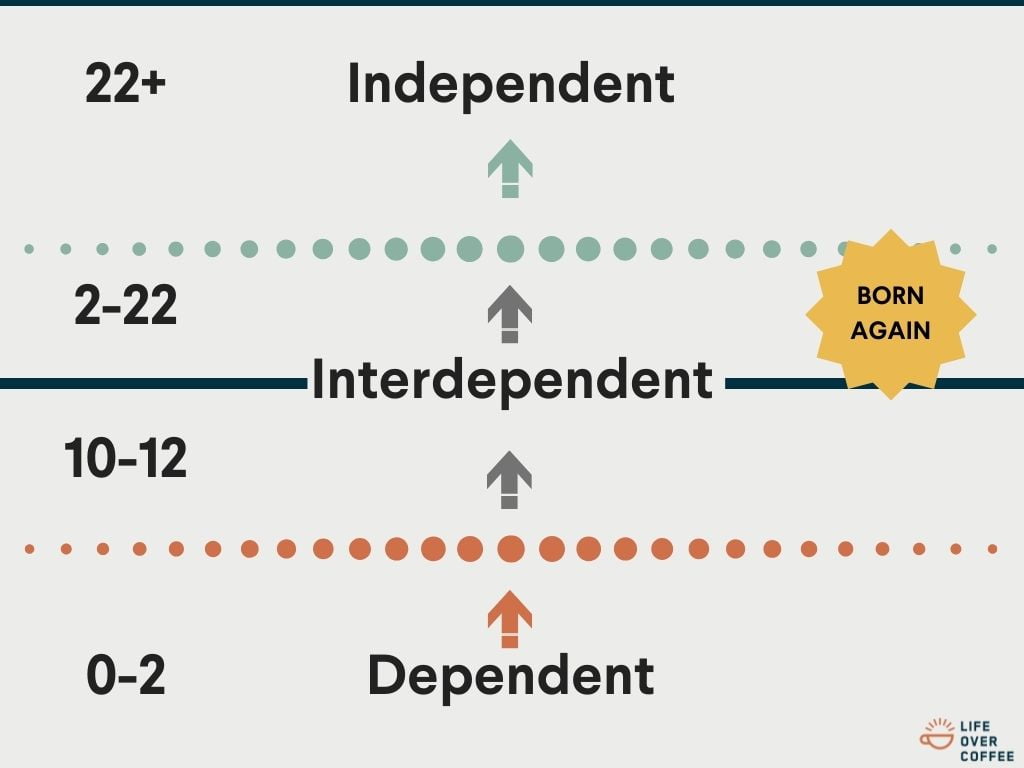 Both developmental periods need careful, skillful, and wise parenting. During the first stage, the mom is more hands-on as she nurtures, bonds, and provides practical care. The dad is very much “on the job” and in the picture during this season, but the mom has the most significant impact. The father plays a more critical role during the second transitional window.

In my article, A Dad Is a Powerful Picture of God the Father to His Child, I made a case for how the father will have the most significant impact on a child’s life during this second season, even more so than the mother. I’m speaking specifically to how a son or daughter learns how to relate to God as a Father.

Even as he leads through the “10 to 12-year-old window,” his impact on the child is already built into them. The teen years reveal how a child has already processed and applied the effect of his father’s leadership, whether that leadership is excellent or poor.

The reason this second developmental window is so crucial is that this season in a child’s life is when he is changing from a kid to an adult. Here are a few examples of the dramatic shifts from one phase to the next.

Everything is in flux, which is part of the reason there is such a high level of self-consciousness among teens. Middle school is the breeding ground for fear of man. (Listen to this instructive podcast from This American Life called Middle School–Episode 449.)

In the Old Testament, boys became men at the age of twelve. This season represents new physical and spiritual awareness in a child’s life. Our culture, for the most part, has not bought into this notion, which is why we have teenagers. Before World War II, most children were apt to go from boys to men without becoming modern-day teenagers.

My grandmother was perplexed by the modern teenager and their accompanying irresponsibility. She didn’t understand the spoiling and coddling which came with the lowering of expectations. She believed the creation of “the teenage window” was a mistake. From her perspective, giving them video games, technology, binge TV options, and serial dating to appease them was a colossal miscalculation of judgment.

The average teen today has no clue how to become a man or a woman. The typical parenting methodology enables this cluelessness by filling the teen’s calendar with what they want to do. Then the parents send them to college, only to be surprised when they come back ill-equipped to live well in God’s world.

The essential issue is that the child had nobody to lead him in adulthood. Dads and moms were too busy and preoccupied while the children were left to figure out things, which usually included peer input. The child’s insecurity and lack of wisdom become the impetus to learn from the most persuasive authorities in their lives, which was not their parents.

Without the loving and navigating arm of a father, a child is at the mercy of their chosen peer group. How a dad prepares his child for this transitional window could make all the difference. But the shaping influences of a passive, driving, critical, or angry dad reduce the chance of the child having a deep passion for God.

It’s the father who lays down a loving, encouraging, and theological framework that will keep the child from tempting cultural expectations. Though the mother is assisting and supplementing within their co-parenting methodology, the primary biblical authority in the home is the father. He sets the tone and cultivates the environment for leadership development.

What Boys and Girls Want

A father can give many things to his children, but there are two that are more vital than the others. For the teenage boy, it is his dad’s affirmation for being a male and the directive encouragement for his life choices. For the young lady, she desires her father’s love and protective security. Generally speaking, all men and women want these things from their dads.

These desires are God-given and unique to the genders. The Lord made them male and female and uploaded the sexes with a unique set of specific desires. Adam is a man because God made him that way. God made Eve for Adam, which implies that she wants something different.

Up until this transitional time to adulthood, children fly under the radar in their parent’s homes. Their world is small, and the demands and expectations of the big, bad culture are a few years away. As maturing and independence begin to take them over, the reality of taking flight heightens. Their chronological clocks usher them into the infant stage of adulthood.

The reason these things are crucial is because of their acute self-awareness, which is always accompanied by insecurity. This “teenage condition” is why the foundational biblical work of the dad throughout the child’s life is so significant. If the father is properly leading the child, appropriate to their ages, his influence will be an imitation of God the Father.

A child is not able to develop a deep and mature relationship with God as a Father. There are spiritual and psychological limitations that fit into the bucket of immaturity. Dad becomes the de facto father or stand-in until the child matures into a full-blown and deep relationship with God, his most significant Father.

Of course, when he blows it with his child, part of his leadership development will be teaching the kid about repentance. But if he is not the correct biblical influence, the child will be tentative about developing a relationship with God as an adult.

An insufficient imitation of God as a Father will leave the child vulnerable and insecure. He (or she) will be motivated to find a security blanket. Boys will look for affirmation and encouragement, and girls will look for love and support from others (James 1:14-15). Here are a few examples.

A child with a loving, affirming, encouraging, supportive, teaching, motivating, hugging, and communicative dad will not likely use the gifts that God has given him to fill a sinful craving for attention. Let me illustrate a man’s desire for affirmation and encouragement.

When an adult man meets another man, one of the first things they ask is, “What do you do?” This query is an identity-based question. A man connects his identity to how he thinks about himself and relates to his world. There does not have to be anything wrong with identifying with your work. God made Adam that way. The counter is to be a failure.

A Girl’s Love and Security

Girls are no different except for the portals through which the temptations come. Just like the boy, the dad is the de facto father. If he has done his job well, he will not set her up to crave attention from her false lovers because she wants someone to love and protect her. Her daddy has provided loving and protective care.

If dad was a jerk, the girl might be vulnerable to preying teen boys. There will be a sense of void in her life, and it won’t be long before hormones in tennis shoes shows up to whisk her away. The rest is history. In many situations like this, they will be fornicating, and their lives will be forever changed.

Dad, I cannot emphasize enough the importance of your role in your child’s life. If you blow this leadership opportunity, you will set your girl or your boy up for a lifetime of potential failure. You will feed their preexisting “Adamic idolatry,” and even if God regenerates them, they may spend years overcoming this deficit you put in them.

Mom, your role in your child’s life never ends, too. You will always be their mom, and they will always be your sons and daughters. But you must understand your role toward them and how it operates in their lives. You are not the father, and you can never do what a father should do.

There are reasons for the two genders and their unique roles, whether boys and girls or dads and moms. Ultimately, our children must come to God, where they will find fulfilling affirmation and acceptance through Him alone. Earthly fathers are only the connection through which children perceive and experience God the Father. And even when parents fail, God’s grace is greater.

What I have described is how things are supposed to be, but it is not how it usually turns out for many parents and children. For various reasons, some dads do not do well on the job. In such instances, it is on the local church to step up alongside the mothers and their children to provide what their fathers did not.

There are many men and youth ministries that can come alongside a young boy or young girl in a mentoring context, as appropriate. A parent’s local church could be God’s favor for a hurting child or a struggling parent. My counsel to you is to reach out to your local body, appealing to them to come alongside you.

« Four Stages to the Christian Life. Where Are You?
When You Finally Realize That God Is Not an American »