The Toxic and Damaging Effects of the Angry Dad 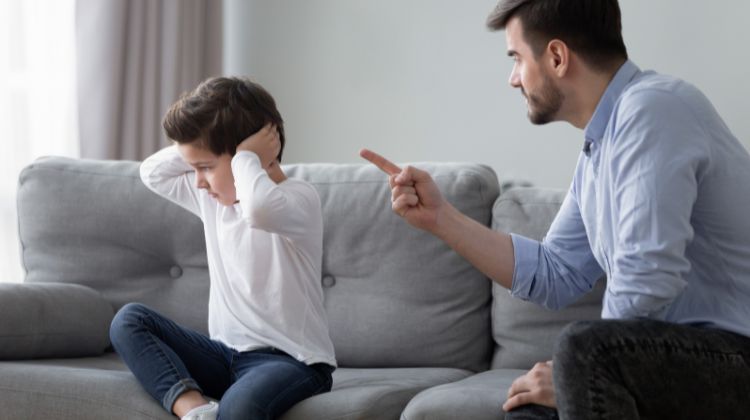 Few things are more frightening to a child than an angry dad. An angry father in the home is the metaphorical equivalent of rolling a child’s heart through a minefield. The angry dad forces the child to live between two worlds: strive to be perfect or receive the father’s exasperating disapproval. The accumulative effect of that kind of torment is hard to overcome. If the angry dad does not change, the child will fall prey to a lifetime of internal and relational struggles.

Regrettably, many children never completely overcome the effects of an angry father. I have counseled several “fifty-year-old” children who are still trying to please their fathers, even though some of these dads died years earlier. The craving to please happens because every child comes into our fallen world timid and insecure, longing for loving stability, safety, and protective care. The native craving for security is part of what it means to be born in Adam. When Adam and Eve walked away from God (Genesis 3:6-7), part of the consequences of their sin was fear-centered insecurity (Genesis 3:8-10).

We have inherited the results of Adam and Eve’s actions (Romans 5:12). Fear, timidity, and uncertainty are part of every person’s nature. Imagine a child coming into a cold, harsh world only to become dependent upon and vulnerable to an angry father, not knowing how to please him or stay out of his way. It’s a lose-lose situation for an Adamic child. The child’s desire for love, affirmation, and security will not happen while he is in the home, assuming the dad never repents. As he grows older and makes connections outside the family, he will sense a calming from the craving for his dad’s love and affection, even though the satiation of them is usually idolatrous.

In nearly all of these child development debacles, the effect on the child is that he reacts poorly toward God and others after becoming an adult. No child has the spiritual or psychological ability to process what is happening to him accurately. Without the maturity of manhood or biblical insight, he will process the sinful dynamics of his home life improperly, typically accusing himself of why things are the way they are. When the significant people in a child’s life fail him, there is little hope that he can exit childhood unscathed.

Initially, it is a shock to observe a parent’s failure. Children perceive them as perfect. And why not? They are older, taller, stronger, smarter, and less dependent. They are also authority figures, which assumes being right. It stands to reason for the child to see his parents as perfect because they are in the know—at least from the child’s limited and immature perspective. Even if the child does perceive his father’s wrongs, he will not stand up to him. His dad’s power and stature manipulate him to suck it up while internalizing the confusion in his soul. It’s the double-whammy effect: he labors under his native Adamic curse and the depravity of his dad. It is too much to ask a child in a situation like this to be mature by doing the right thing.

Of course, the child’s unique constitution will determine how he internalizes, processes, and responds to what is happening to him. If the child’s tendencies are toward introversion, he will become quieter. Being silent will be his default way of hiding in plain sight of his dad. Being quiet will be his refuge and escape. The quiet child might choose to enter the cyberworlds of television, video games, and other technologies. This strategy will not only remove him, virtually, from the chaos of his home, but it will allow him to create safe spaces to enjoy life through vicarious escapes. For example, the story arc of a show permits him to fantasize about how life could be. It happens in four parts.

If he chooses video games, he will learn how to become good at something—how to win. With winning in view, he enters the theater of his mind, where victory is only a few levels away. With enough persistence and assurance of unending resurrections, he can enjoy a radically different fantasy from his hellish home life. The sad part about the internalization of his troubles while acting out through gaming is that he is seething in low-grade anger. He doesn’t necessarily show his rage early on, but the turmoil and confusion will eventually come out after he becomes an adult.

The parents will scratch their heads, wondering why all this anger comes from their teenage son. For now, he’s too young to articulate what is happening to him, and they are too preoccupied or dysfunctional to notice the silent death operating in his soul. So he quietly sits and simmers in front of his screen until the day comes when he can express through words and deeds what he has been harboring in his heart for years. If the child’s personality is bent toward extroversion, he will be outwardly angry, competitive, or whiny. He will direct his anger toward those he can be mad with, which is his way of controlling the world that is primarily out of his control.

Both kids—the quiet and loud—need something or someone they can manipulate and defeat. The quiet kid manages and manipulates his technology, while the extrovert kid controls the family. In both cases, it’s manipulation that becomes their modus operandi. Manipulative anger offsets and satiates the internalized inferiority and fear they feel from their overbearing and dictatorial dad. The common prey in either kid’s sightlines will be their mother, someone they can easily conquer, which ironically mirrors the dad’s superiority-through-anger behavior.

All Things in Common

The one thing these kids have in common is their desire to be good at something—to win, to conquer, to feel victorious at something. They choose what is best suited for their personality types to overcome the displeasure of their fathers. The quiet child does not want to displease, so he chooses passivity and non-aggression. The extroverted child seeks to overcome by initiating aggressive, superior tactics. Their ever-growing Adamic desires for love, respect, and affirmation will create distance between who they are and what they could be in God through Christ.

Sadly, it’s the parent’s job to stand in that gap, shepherding the children to close that space until both child and Christ are one. It’s the dad who is on point primarily, cooperating with God to lead the child to the only person who can transform him from being Adamic to Christlike (Colossians 1:28). The parents will help or hinder this distance between the child and God. A child’s father is instrumental in this process because he is the earliest, most straightforward, and most profound picture that a child will ever see of God the Father. Some people have called this concept mutual exclusivity, which is how a child learns words and categories.

Mutual exclusivity is a child’s infantile ability to only apply one label to all the objects within a category. For example, an elephant is not a Pachyderm, which could mean elephant, rhinoceros, or hippopotamus. An elephant means one thing, not three. When it comes to what a father is, the child develops his label, definition, and interpretation of what a father is by observing his father (1 Corinthians 11:1). He understands what God the Father is like through his earthly father’s attitude, words, and actions. It never occurs to a young child that there could be two or more kinds of fathers.

If a father is a poor representation of God the Father (Ephesians 5:1), the child will have difficulty relating to God the Father as an adult. It could take years and a lot of strenuous spiritual work to realize that God the Father will not treat him harshly or unkindly, and the Lord does not relate to him based on his poor performances. Hopefully, he will learn that rather than God placing harsh demands on him because of his sinful behaviors, his heavenly Father has chosen to punish Jesus for the things that are wrong with him. The love of his heavenly Father will draw the child to freedom, which is something his earthly father’s anger could never do (Romans 2:4).

If you are motivated to serve God out of fear instead of love, you are nothing more than a nervous circus performer. Nothing relieves the pressure to perform for acceptance, like a father’s approval that is not conditioned on performance. The child of an angry dad has a hard time embracing God’s mercy, favor, grace, and love because it has never been his experience. The only father he ever knew was an angry man who put him under the fear of never meeting his expectations. How could he think otherwise?

Some dads may read this and say they do not have the kind of angry anger that I am writing about. I hope that is true. Still yet, any ongoing disapproval of a child will harm that child. Your child looks up to you. He is born insecure and uncertain. He is Adamic—fallen and totally depraved. He is unsure if he is doing things correctly. He needs your affirmation (Mark 1:11). He needs to know that you are for him (Romans 8:31; Genesis 39:2). Dad, you are the primary person in his life to affirm your affection and approval of him. If you are harsh, picky, unkind, uncharitable, unloving, or disapproving, you are sending a strong message that he does not measure up to your standard. As he grows older, there is a near 100 percent chance he will look for approval in other places.

Dad, if you are angry, disapproving, overbearing, passive, or distant, you must repent of these sins, including the rolling of your disapproving eyes or the elevated tones in your voice. (See the manifestations of anger in the Anger Spectrum.) Even these lesser and seemingly inconsequential sin patterns communicate to your child that you do not accept him. There is a way to deal with your child’s sin, but an expression of sinful anger will not draw your child to Christ, no matter how subtle you believe it is.

« Dear Parents, Will You Stop Your Arguing? Please!
To Those Who Are Angry with God for the Life They Have »