The Mystery and Misunderstanding about Being Worthless

If you isolate a portion of Scripture from the narrative of the Bible’s story, you can misunderstand its meaning. Isolating texts is why some Christians struggle with the Bible’s declaration about us becoming worthless. What did Paul mean? Why is that negative statement an essential aspect of the good news?

When I was a child, it was common to let a person know they were going to hell if they did not trust God. It was not a harsh thing to say; it was a compassionate thing. Bad news always precedes good news.

The culture has drifted so far from the shore of truth that it cannot see it any longer. God’s Word is obscure to them. They pull the parts they know through a psychologized filter to soothe the soul with palatable words.

The culture’s drift is why Paul’s words in Romans 3:12 sound like a horrible accusation that threatens how you want to think about yourself. Paul’s words in the raw will jar the post-modern psychologized mind. Guess what? It’s supposed to jolt you. God’s Word is meant to knock you down (2 Timothy 3:16).

You might want to brace yourself, particularly if you have one of those psychologized minds. Are you ready? Paul said, “All have turned aside; together they have become worthless; no one does good, not even one” (Romans 3:12).

PMA All the Way!

If you are told over and over again, through a zillion means, negative evaluations harm your soul; you have no choice but to deny Paul’s words or reinterpret what he said while embracing the culture’s version of self-generated goodness.

There is no question Paul’s words are discouraging, which is why it’s unwise to isolate them from the rest of God’s Word. You should contextualize Paul’s language between Genesis and Revelation. If you do not know this, the doctrine of self-esteem will snag you.

The culture demands you reject anything contrary to a Positive Mental Attitude (PMA). A current dust-up over the fragile psychologized mind is a movement to change the name of the Washington Redskins pro football team. It is no longer proper to say, “Redskins” because it damages a person’s self-esteem, so they say.

In the last chapter, I talked about how the Christian bases his view of himself on the “made in the image of God” concept rather than the culture’s doctrine of self-esteem. The “image of God” presuppositional worldview keeps your thoughts in God’s Word. The “self-esteem” worldview leaves you with the culture’s solutions to wholeness.

Because self-esteem is a secular doctrine outside of God’s Word, all their solutions are secular. Your starting point determines your ending point. This idea is a presuppositional truth. 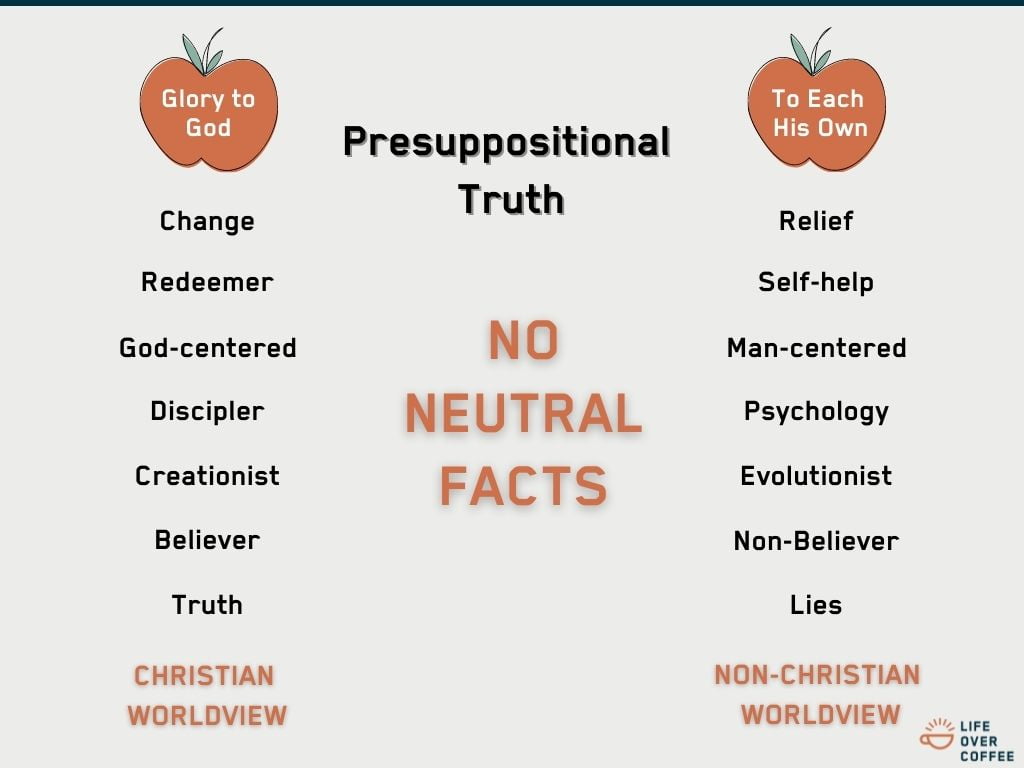 God’s Word has a radically different starting point, which is not Romans 3:12. In Genesis 1:27, we see that God made people in the image of the Trinity.

The next big thing on the calendar of human events was the marring of God’s creation in Genesis 3:6. Adam and Eve chose to walk away from God, and that decision led humanity into a worthless condition (Romans 3:10-12, 5:12; Revelation 20:15).

The goal of Paul’s language was not to damage the soul but to enlighten it. Worthless is the condition of every person. Let me illustrate: Suppose you bought a brand new vehicle and drove it off the showroom floor. The car is perfect and beautiful in every way. It’s the way things ought to be.

Index forward thirty years. That brand new automobile sits in the junkyard. It’s worn out, broken down, and has “become worthless” to use Paul’s language. What was once a fantastic vehicle, built by a master craftsman, is now in the junkyard. That is what happened to you and me.

You pass by, look at the car, shake your head, and say, “It has become worthless.” If it were a post-modern car that could talk, it would say, “You can’t say that about me. I’m not worthless. I’m somebody. You are damaging my car-esteem.”

You respond, “Think what you want to think about yourself, but you have become worthless. You may have been something once upon a time, but you are not that any longer, and if you want to rise from this junkyard, it will not happen by the mirage of self-generated value. You need outside intervention.”

The Master Craftsman chose to make you in His image (Psalm 139:14), but humanity took a devilish turn in the garden of Eden (Genesis 3:6). Humanity landed in the junk heap of life (Ezekiel 16:6).

Your condition is so bad that any good things you do are dirty things (Isaiah 64:6). You became worthless. The secular person puts his psychological fingers in his ears and runs and says unkind words to you at this point. No surprise.

Christians repulsed by this “worthless” truth is a surprise. Rejecting the reality of your worthlessness is to misunderstand and misapply God’s Word in the most practical ways to your life. To think you are something that you are not is willful self-deception.

There is no doubt it would be the most horrible of tragedies if you were stuck in Romans 3:12. To be worthless and left in that state is a desperate condition, which explains why the culture is so extreme, competing, tromping all over each other in the pursuit of creating something (anything) that gives them a feeling of self-importance.

If you follow sports, you see this all the time as the prima-donna athlete does all kinds of “post-great play” stunts to create a buzz that will pump up his insatiable ego through the next 24-hour news cycle. It’s a shallow and sad 15 seconds of fame.

The Christian does not have to compete in such nonsensical exercises to fill a fictitious love cup because he knows what Paul said in Romans 3:12 is the condition and position that sets him up for God’s supernatural intervention.

Jesus came for sick people. He did not come for the person fighting to keep his ego pumped up through thoughts of self-worth. Christ came for the broken, empty, and sick. To use Paul’s language, he came for the worthless beggar. God is interested in totally depraved people who know it and accept it, not those who resist it.

That kind of person is ready for grace. He knows God made him in His image (Genesis 1:27), became worthless (Romans 3:10), and God must restore him. The bad news does not damage his psyche. It positions him for good news.

The Christian is free from a sin-centered, worm-centered, worthless theology. He would be stuck if his story ended in Romans 3:12. The worthless vehicle with no means of escaping the junkyard is in a horrible place.

The Rest of the Story

The Christian knows the rest of the story. He requests the second birth because his first one landed him in the junkyard of life (Romans 5:12). The unbeliever is a totally depraved, worthless sinner, with no hope of extricating himself from his depravity. He listens to the words of Jesus: You must be born again (John 3:7).

Regeneration is something the secularist can never do. He is left to his own devices, which is why the self-esteem doctrine is so readily received. A second birth is a perfect antidote that rescues you from the junkyard. God will restore you to what you were supposed to be–a person made in the image of God.

Being born again does more than restores you to how you should be; it guarantees no more brokenness. The whole story for the Christian is a three-part narrative.

Regeneration is an unusual turn of events, all brought to you by the power and grace of God, not by a twisted self-esteem doctrine that sends you into a hopeless maze of artificial feel good, so you can psyche yourself up to be something you can never be outside of divine mercy and intervention.

God contextualizes your hope in His power rather than secular contrivances. Salvation gives hope and practical help to the desperate soul. If you are born again, you’re on the path to restoration. You’re not there yet. You’re on the track, which is why Paul had so much hope for the troubled Corinthians.

(God) who will sustain you to the end, guiltless in the day of our Lord Jesus Christ. God is faithful, by whom you were called into the fellowship of his Son, Jesus Christ our Lord. – 1 Corinthians 1:8-9

Think about what he said to this corrupt and broken group of people. Sin owned them, but Paul knew the end of the story, which is why he could say they would be guiltless in the day of the Lord. You could say it this way,

No matter what you’re going through or what you’re struggling with now, be assured that you will be okay because what God begins, He finishes (Philippians 1:6).

Paul was talking to the Christians in Corinth. He knew they were made in the image of God and had become worthless. Paul also knew they were born again. His robust theology did not deny the extreme realities of the human condition, which is why he was so full of faith for how things were going to end for the Corinthians: they would be guiltless in the end.

A Christian is different. His does not base his view of himself on his greatest achievements. It’s also not based on other people respecting or rejecting him. He does not live or die by the latest polling data. He builds his hope on nothing less than Jesus Christ and His righteousness. This worldview is faith that sustains him through this life while preparing him for unending, future satisfaction.

« Does Your Spouse Know You Are for Him?
Why People Won’t Listen to You »