How to Separate Well (from Your Spouse) 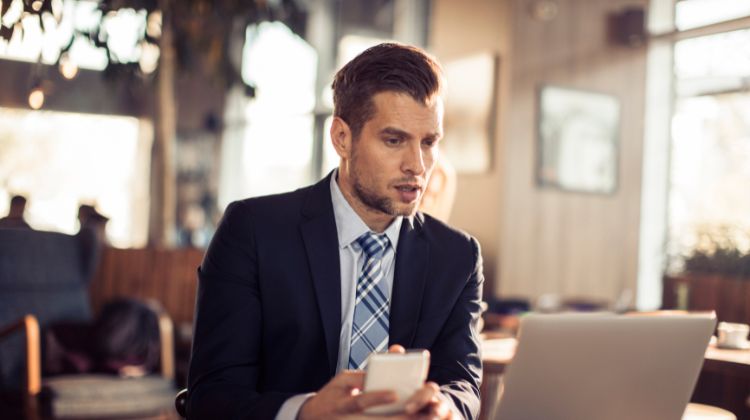 Marital dysfunction and the potential separation of a spouse is a horrible experience that happens too often in Christian marriages. Did you know there is a way to separate well and a way to do it badly? Separation and divorce are not what we should do, but if it happens, we must do it the right way. In this case study, the wife is leaving; you can flip this fictional narrative around to where the husband is leaving because the truths apply to both genders.

Mable had enough. Their marriage stopped being fun many years ago. She appealed to Biff to change more times than she could remember. She hoped. She prayed. She appealed. Then she did it all over again. This cycle went on for years. Biff made promises to reform, but he never changed.

He modified his behavior, but his heart was the same, and like a stain bleeding through a white fence, the old ways came back. Partial or inconsistent change was not good enough for Mable. She began to lose hope that he would ever change. Finally, she bit the bullet and left him after twenty-three years of marriage. Biff was devastated.

The irony of the separation is that Mable had always been willing to give in, acquiesce, talk about the problems, and even bend whichever way she needed to preserve the marriage. Biff, on the other hand, was always strong, stubborn, determined, and resistant. At some level of his heart, he knew he needed to change, but he was never motivated to do what it took.

The day Mable left, things flipped utterly. Biff became a pleading mess while Mable grew cold, focused, and unrelenting in her decision to leave. I have seen this “personality switch” many times when a marriage goes past the breaking point. While in the marriage, one spouse is hopeful, prayerful, and willing to work things out with their mate.

The other spouse is not interested in putting forth the effort needed to reform the marriage. Biff was comfortable. He would not see past his self-centeredness to consider what his wife desired for their relationship. She stopped waiting. She turned off the switch. She stopped hoping and started planning an exit strategy.

Her emotional attitude turned cold. What used to be a willing, unassuming woman had transformed into a vicious, survival of the fittest competitor. She felt justifiably free to do what she wanted to do. Though still married, attitudinally and practically, she had moved on with her life.

Biff, who used to be a self-controlled fortress of self-absorption, turned into a sad pile of mush. He was dumbfounded and confused. He said that he never saw it coming, which is probably true. He was so into himself that it never occurred to him that she would play the divorce card. Biff is free-falling.

His life compass is spinning wildly. He had no mental or spiritual equilibrium. He felt hopeless and lost. He comes to you for help to figure out what to do next. He is anxious, “I must do something,” and in paralysis, “I don’t know what to do.” Mable is not like this at all. She turned off the light switch several weeks ago and had indexed forward with her life.

What Biff is going through now—hopelessness—is what Mable has been going through for years. After she had given up on the marriage, she became a proactive planner. When a spouse’s heart turns as cold as ice, and the emotion and hope for the relationship have gone down the drain, the spouse can be shockingly clear-headed about what she wants, even to the point of being brutal.

Things unraveled. You can predict what will happen next: the husband will overreact, desperately trying to win her back. He morphs into an inauthentic Prince Charming. His desperate behaviors have only begun. At some point, he will go into his groveling, pleading, and begging mode. It will be an all-out, last-ditch effort to get her back into the fold.

The thing he does not understand is that he has the world’s worst breath to his wife. She can see right through him. His requests are repulsive to her. She is beyond convincing. That shipped sailed. If he could discern how she thinks now, he would realize how convinced she is that nothing has changed. She reasons like the following:

If Biff awakes from his relational stupor, he will see the light. Snapping out of it is the best thing that could happen to him now. God is calling Biff to do something that will be nearly impossible for him to do. He will need to do what he has not been doing all along. He needs to pursue God with all his heart, mind, and strength (Mark 12:30-31).

Before Mable left, Biff was a confident, “performing-in-his-own-strength” kind of guy. He was self-assured, even to the point of ignoring his wife. He could do whatever he wanted to do, and it never occurred to him how things could be different between them.

After Mable had left, Biff resorted to other self-reliant strategies: “I can get her back by using my wits and strengths.” Whether before or after, the theme in Biff’s life was that he was not walking in humility, wisdom, or power—the things that come from the Lord. He forgot God during his marriage. Now he forgets God in his pursuit to win his wife back.

For the word of the cross is folly to those who are perishing, but to us who are being saved it is the power of God. For the foolishness of God is wiser than men, and the weakness of God is stronger than men (1 Corinthians 1:18, 25).

Biff needs to do something that is “biblically foolish.” He needs to pursue God rather than his wife. Biff is going to have to do something counter-intuitive to his native thinking and behaving. That is the beauty and the power of the gospel. Though it does not make sense to the natural mind, it is wisdom and power to those submitted to it.

This perspective is hard to grasp for a self-reliant person like Biff. Though my request is simple—trust the Lord, it is nearly impossible for someone as desperate as an individual losing his spouse. To help him see what I’m saying, I have used this visual, which came from a counseling situation just like what Biff is experiencing, plus a practical plan for him to consider. 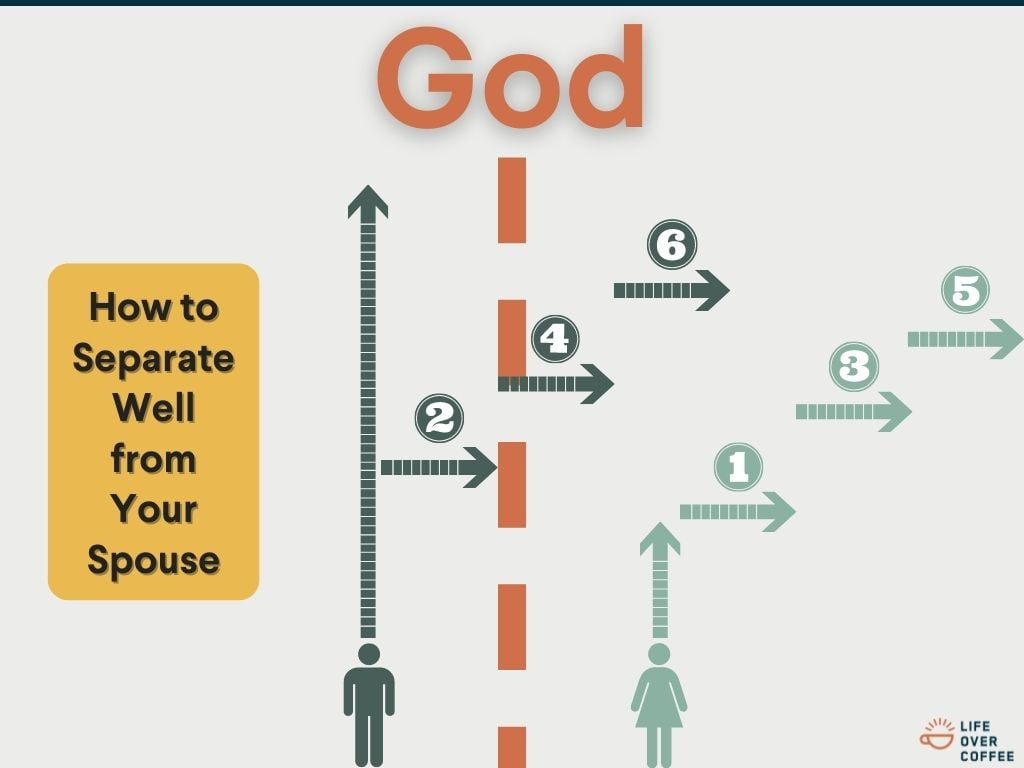 Initially, Biff and Mable were moving in the same direction in their marriage. They were side-by-side in their mutual pursuit of the Lord (green arrows). Then adverse things began to happen in their marriage, and they did not biblically respond (repent), which would remove the negative stuff from their lives.

Mable starts to perceive something is wrong, and her soul becomes troubled. Her first response is to make requests, appeals, and pleas for Biff to lead differently. Nothing changes. After a few years of asking, she grows distant in the marriage (red arrow #1). Biff perceives this relational distance, but instead of pursuing the Lord, he reacts out of fear or anger.

He wants to close the gap that came between them (red arrow #2). At that point, both of them are off-center. Their marriage is out of sorts. Biff and Mable compromise their mutual pursuit of God. One of them may become satisfied with this new “realignment” of the marriage. As long as the relational distance is the same, why does it matter that they have not centered the marriage on Christ?

Mable knew things were not right. Her response to this new realignment was to create more space (red arrow #3). Upon noticing this, Biff moved toward her to close the gap (red arrow #4). Again, it is the same problem—they are moving further away from the primary purpose of marriage: to pursue the Lord together (the black and white line).

Mable is now out of the marriage, and Biff is complicating things by pushing her further. He will worsen a terrible problem if he does not realign his heart to God, rather than his desperate attempts to stop his wife from leaving. The point here is that he needs to let her make her choices, regardless of what they are, while he chooses to follow the Lord, irrespective of the consequences to the marriage.

Pursuing God rather than his wife is his best shot at restoring the marriage. Biff needs to go back to where God wants him to be. He needs to focus on pursuing the Lord with all of his heart, soul, mind, and strength regardless of whether his wife comes back to him. He needs God more than he needs his wife.

God calls a woman to submit and to follow her husband. It is essential for the man to give her something to submit to, respect, and follow. This something is a “God-impassioned man.” I have often said that a Christian woman would have to be out of her mind not to want a man who loved the Lord more than anything else.

A man who is authentically pursuing God can be trusted because he is not relying on himself but fully trusting in the Lord (2 Corinthians 1:8-9). Biff will have to decide what he is going to do. If he loves God rightly, he will be able to love his wife properly. If he is going to pursue his wife while giving God a courtesy nod, he will lose the possibility of restoring either relationship (Matthew 6:24).

There is an unstated and obvious question that I am sure many of you have thought about as you read these things. Should Mable quit her marriage? The obvious answer to this issue is, I do not know. This piece is not about divorce; it’s about separation.

Biff has many issues he needs to address and rest assured that Mable also needs to mature in Christ. No separating couple has a guiltless partner. It takes two people to destroy the covenant they made. In this article, I have addressed what Biff should do to separate well, with the hope of reconciling with his wife. If Mable were willing to come to counseling, I would want to help her see how she could redemptively participate in restoring the marriage with the hope of reconciling it to the Lord.

« Why Each Person Needs Care According to Their Uniqueness
When Unforgiveness Lingers, Resentment and Bitterness Enter »